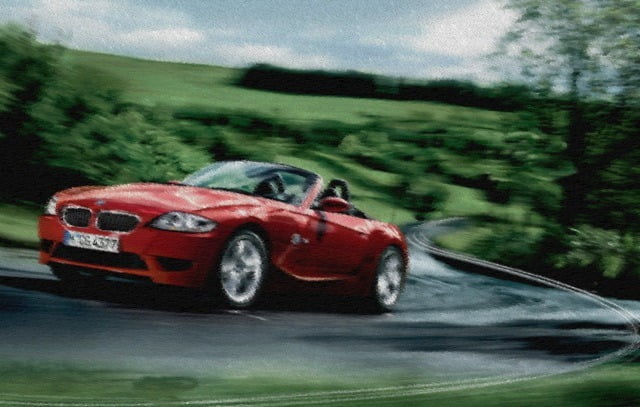 “I have never handled 300hp before, so I struggled to control it,” I told Ivan, who were kind enough to offer me some pointers driving my Z4 M in autocross. And of course, to offer the most relevant advice, he would need to compete in the same track in the same car.

“Neither have I,” Ivan chuckled.

“What?!” All the curbs that we just went around now flashed before my eyes.

“If I had told you, you wouldn’t have let me drive!” He laughed.

Ivan set the fastest time of the day on the second run in the BMW Club Gymkhana. My best time was 2 seconds behind him. As a passenger, there was not a moment I felt scared. He was very composed. He told me he could have gone even faster, maybe shaving off another 2 seconds. Maybe then I would feel scared.

I was at the BMW Club Gymkhana because I did not do well in the Grass Racing Autocross (GRA) the weekend before. I got third position, but that was not the point. The car would not listen to me. It just did its own thing. Most men secretly believe there is life in their cars. So do I. I felt like I was at the verge of finally connecting with it, but not yet. Sometimes it behaved as I willed it, sometimes it does not. Doughnut “happened” as if it was the will of the car, not the driver. Hence I direly needed another opportunity to “listen” to the car, and “talk” to the car. There I was. This time, I felt I was getting closer. It seemed as if I was taming the beast.

One thing I learned at GRA was: remember old lessons, and think independently.  The car park for the race was sandy. Grip level was low. Therefore, some experienced participants advised me to use traction control. I tried two runs with it switched on, and it hindered my acceleration like a overly cautious nanny. To be exact, it was one and half run, because I grew so frustrated in the second run that I switched it off half way, right before a 360 degree cone.

I was disappointed with myself because I always ran my races without traction control, yet it costed me one and a half run to find out what I already knew. You cannot have two brains driving the same car while racing. It was like having your wife onboard. Of course, that was not the perfect analogy. You could not shut your wife up with a button.

I did my remaining runs without traction control. They were much better. At least I could be certain now that I drove faster by myself. Traction control is for saving lives, not racing.

A friend of mine, Neil, always offer his advice with a disclaimer: “I wouldn’t know how your car behave, but…” Later, I realized experienced and responsible drivers always gave advice making clear it maybe car dependent. There was an “instructor”, name censored, who advised me to floor the throttle to induce oversteer — in my Subaru Impreza STi version 7. I was very ignorant back then, and experimented so. I nearly understeered into a lake.

Ivan used such disclaimers too but even him might overlook things. I wonder if he remembered asking me to turn Sports mode on when racing in autocross “to get more power”. Let’s just say he found out why it had better be left off when he drove the car himself. I suspect the Sports mode was originally named “Mad Horse” mode.

Ivan introduced me to the idea of throttle steering. I knew the concept from books, but never had any chance to experiment it in my previous, less powerful cars. I was rather excited to find out on some first-gear corners, I could use the throttle to turn more. I was nowhere near precise yet, but I could recall how the car bit me at every turn in my first gymkhana experience. I would apply too much throttle every time, and the car spun. Now I could control it better.

Andy too was there. He pointed out sharply that I braked too late for a slalom. I wanted to carry more speed, but I messed up all the following lines and lost time. I read about “going slow to go fast”, but there was nothing more enlightening than having a champion racer pointing out the exact application of it at the exact turn in a real race.

As a side note, both champions noticed that I had a subconscious fetish for handbrake. “Put your hands on the wheel,” Ivan commanded from the passenger seat as I was driving. I honestly did not understand why he said so at that moment. In my mind, my hands were already on the wheel. He said my left hand was reaching for the handbrake. Andy noticed the same thing, and re-played the in-car video as proof. After the lesson, I glued both my hands to the wheel for the remaining runs… at least I thought I did.

The champions left early. My remaining runs without them were less satisfying. Somehow I lost touch with the car again. KKS Autocross was going to be held on the next day. I made up my mind to participate.

In the first half of the race, the car was just going everywhere it wanted to go. I developed a theory over the lunch break. The limit of the car was way above my capability. If I tried to exploit its limit, it would be in vain because my brain just could not cope. What if I slowed down to my own pace, and then worked upwards from there gradually?

For the rest of the day, I was more gentle with the throttle. I had a lot of fun because all of a sudden, the car responded to my will! Also because now I had the time to “will”. When I was driving too hard, the car charged towards a cone so fast that I could not react in time. I would miss the braking point, shifting point, turn-in point, handbrake point, even the exit point. My intended doughnuts became pretzels. Since the racing line was all screwed up, so would the next turn which would again approached all too quickly.

When I slowed down a little, I had the time to think and react. All of a sudden, everything flowed. The problem is, I am still not sure whether I was really fast or it just felt so, because the KKS Autocross time results are still not published yet 5 days after the race. I’ll just have to update this blog later when they release the results, if ever.